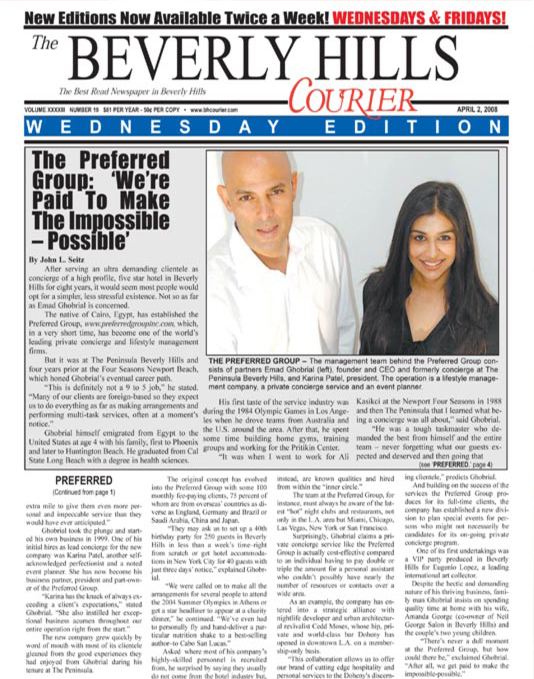 After serving an ultra demanding clientele as concierge of a high profile, five star hotel in Beverly Hills for eight years, it would seem most people would opt for a simpler, less stressful existence. Not so as far as Emad Ghobrial is concerned.

The native of Cairo, Egypt, has established the Preferred Group, www.preferredgroupinc.com, which, in a very short time, has become one of the world’s leading private concierge and lifestyle management firms.

But it was at The Peninsula Beverly Hills and four years prior at the Four Seasons Newport Beach, which honed Ghobrial’s eventual career path.

“This is definitely not a 9 to 5 job,” he stated. “Many of our clients are foreign-based so they expect us to do everything as far as making arrangements and performing multi-task services, often at a moment’s notice.”

Ghobrial himself emigrated from Egypt to the United States at age 4 with his family, first to Phoenix and later to Huntington Beach. He graduated from Cal State Long Beach with a degree in health sciences.

His first taste of the service industry was during the 1984 Olympic Games in Los Angeles when he drove teams from Australia and the U.S. around the area. After that, he spent some time building home gyms, training groups and working for the Pritikin Center.

“It was when I went to work for Ali Kasikci at the Newport Four Seasons in 1988 and then The Peninsula that I learned what being a concierge was all about,” said Ghobrial.

“He was a tough taskmaster who demanded the best from himself and the entire team-never forgetting what our guests expected and deserved and then going that extra mile to give them even more personal and impeccable service than they would have ever anticipated.”

Ghobrial took the plunge and started his own business in 1999. One of his initial hires as a lead concierge for the new company was Karina Patel, another self-acknowledged perfectionist and a noted event planner. She has now become his business partner, president and part-owner of the Preferred Group.

“Karina has the knack of always exceeding a client’s expectations,” stated Ghobrial. “She also instilled her exceptional business acumen throughout our entire operation right from the start.”

The new company grew quickly by word of mouth with most of its clientele gleaned from the good experiences they had enjoyed from Ghobrial during his tenure at The Peninsula.

The original concept has evolved into the Preferred Group with some 100 monthly fee-paying clients, 75 percent of whom are from overseas’ countries as diverse as England, Germany and Brazil or Saudi Arabia, China and Japan.

“They may ask us to set up a 40th birthday party for 250 guests in Beverly Hills in less than a week’s time-right from scratch or get hotel accommodations in New York City for 40 guests with just three days’ notice,” explained Ghobrial.

“We were called on to make all the arrangements for several people to attend the 2004 Summer Olympics in Athens or get a star headliner to appear at a charity dinner,” he continued. “We’ve even had to personally fly and hand-deliver a particular nutrition shake to a best-selling author-to Cabo San Lucas.”

Asked where most of his company’s highly-skilled personnel is recruited from, he surprised by saying they usually do not come from the hotel industry but, instead, are known qualities and hired from with the “inner circle.”

The team at the Preferred Group, for instance, must always be aware of the latest “hot” night clubs and restaurants, not only in the L.A. area but Miami, Chicago, Las Vegas, New York or San Francisco.

Surprisingly, Ghobrial claims a private concierge service like the Preferred Group is actually cost-effective compared to an individual having to pay double or triple the amount for a personal assistant who couldn’t possibly have nearly the number of resources or contacts over a wide area.

As an example, the company has entered into a strategic alliance with nightlife developer and urban architectural revivalist Cedd Moses, whose hip, private and world-class bar Doheny has opened in downtown L.A. on a membership-only basis.

“This collaboration allows us to offer our brand of cutting edge hospitality and personal services to the Doheny’s discerning clientele,” predicts Ghobrial.

And building on the success of the services the Preferred Group produces for its full-time clients, the company has established a new division to plan special events for persons who might not necessarily be candidates for its on-going private concierge program.

One of its first undertakings was a VIP party produced in Beverly Hills for Eugenio Lopez, a leading international art collector.

Despite the hectic and demanding nature of his thriving business, family man Ghobrial insists on spending quality time at home with his wife, Amanda George (co-owner of Neil George Salon in Beverly Hills) and the couple’s two young children.

“There’s never a dull moment at the Preferred Group, but how could there be,” exclaimed Ghobrial. “After all, we get paid to make the impossible-possible.”